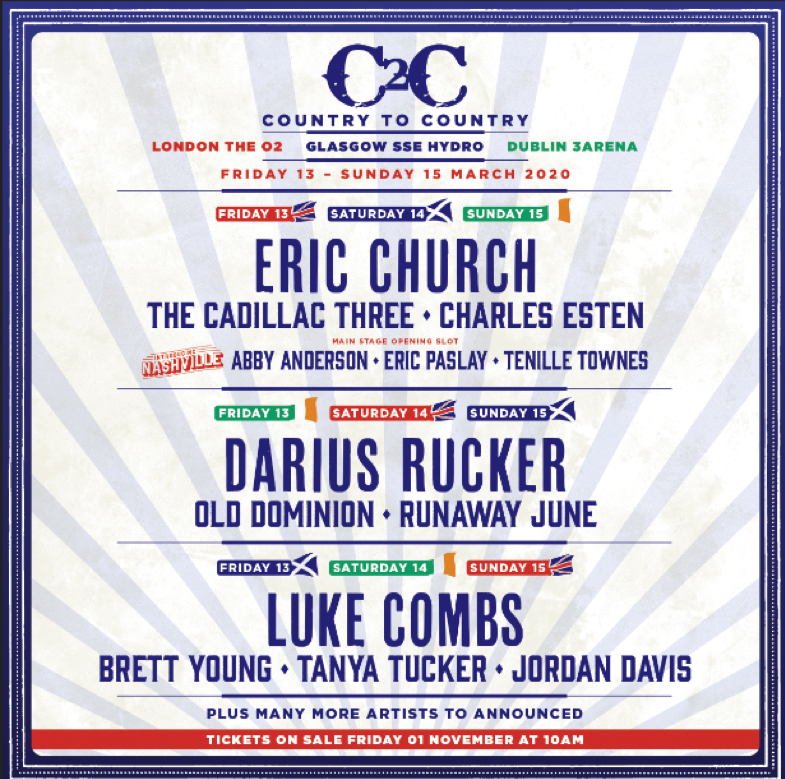 And many more to be announced

Tickets on sale Friday 1st November at 10am

Country to Country; Europe's biggest country music festival is back from Friday 13 to Sunday 15 March 2020. Returning for its eighth year, the festival is set to bring yet another incredible line up to The O2 London, 3Arena Dublin, The SSE Hydro, and venues across Europe.

Joining the headliners and making their main stage debuts are multiple CMA award winners and nominees The Cadillac Three, Tanya Tucker, Charles Esten, Runaway June and Jordan Davis.  Making his return this year is award winning Brett Young alongside 2019 CMA award nominee Old Dominion following a major UK tour this year. For the very first time, international series Introducing Nashville will see artists including Abby Anderson, Eric Paslay and Tenille Townes take to the mainstage together for an acoustic set sharing stories behind their tracks. The C2C Spotlight Stage will also be back.  Watch out for news of the full line up in the next coming few months.

The highly anticipated C2C 2020 line-up was announced at the official launch party at Cadogan Hall this evening, during the third annual Country Music Week in London with a very special message from the legendary Bob Harris OBE who said: “I am so proud to be part of the C2C family.  I have been the main stage host at the O2 in London from the very beginning and have watched the festival grow to become one of the most important and iconic events in the global Country Music calendar.  I am thrilled to once again be hosting C2C in London and broadcasting highlights on BBC Radio 2.  I can’t wait to listen to the best music in the world, enjoy the fantastic atmosphere of the main auditorium, catch the excitement of the pop-up stages and meet the incredible Country fans that make C2C so special”

Chris York, C2C Festival promoter for SJM Concerts commented: “C2C Festival 2020 continues to build on the massive success of Country to Country in the U.K. and across Europe. We look forward to seeing all you passionate country fans in March once again.  We would like to thank our partners at BBC Radio 2 and The Country Music Association and as ever thank you for your support.”

“We are thrilled to see the continuously growing Country fan base in the UK and for C2C to bring such a powerful line-up of artists to international fans,” says CMA Chief Executive Officer Sarah Trahern. “This year marks CMA’s eighth year partnering with C2C, and it has been so exciting to see this festival and the audience of passionate Country fans continue to get bigger and better each year.”

Tickets go on general sale at 10am on Friday 1st November and are available from:

C2C London ticket holders will have access to daytime live performances and other live events. Further details to be announced. C2C Amsterdam and C2C Berlin debuted in 2019 and will return on 7th - 8th March and 6th – 8th March 2020 respectively.

Country to Country has become a staple in the UK festival calendar and has brought country music to the UK and Ireland masses, with tens of thousands of fans attending each year. The festival continuously hosts the best in country music and entertainment; bringing over the world’s best country stars as well as emerging talent from Nashville, UK and Europe. In 2019, C2C welcomed over 70,000 fans, who enjoyed music from artists including; Keith Urban, Lady Antebellum, Chris Stapleton, Brett Eldredge, Hunter Hayes, Lyle Lovett, Cam, Dustin Lynch, Ashley McBryde, Chase Rice, Carly Pearce, Drake White & The Big Fire and more; as well as programming from the Festival Stages, BBC Radio 2 Stage, CMA Screenings, The Bluebird Café, Aftershows and C2C Sessions.

ERIC CHURCH
The three-time Country Music Association and six-time Academy of Country Music Award winner released his highly-anticipated album Desperate Man atop the Billboard Country Albums chart in October 2018. The album also debuted at No. 5 on the all-genre Billboard 200. Rolling Stone describes the album in their July 2018 cover story as “classic Church: expertly crafted and country-radio-friendly, while also pushing boundaries in a way that sounds natural and unforced” and American Songwriter notes in a cover story that it “sublimates the pain of a tumultuous year into his most adventuresome album yet.” Church has returned to the road for his 2019 Double Down Tour, visiting nearly 30 markets for back-to-back nights of two unique shows sans-opening act to give fans 6+ hours of his iconic music in each city. The tour also included a massive stop at Nissan Stadium in Nashville, where Church broke the venue’s concert attendance record with 56,521 fans and nearly tripled the attendance record he set at Bridgestone Arena in 2017.

Rucker first attained multi-Platinum status in the music industry as the lead singer and rhythm guitarist of GRAMMY Award-winning band Hootie & the Blowfish. Since releasing his first Country album in 2008, he has celebrated four No. 1 albums on the Billboard Country chart and nine No. 1 singles at Country radio, earning a whole new legion of fans. In 2014, Rucker won his third career GRAMMY Award for Best Solo Country Performance with his 4x Platinum-selling cover of Old Crow Medicine Show’s “Wagon Wheel.” As a lifelong philanthropist, Rucker is a continuous supporter of the MUSC Children's Hospital in his hometown of Charleston, South Carolina, and has raised millions of dollars for St. Jude Children's Research Hospital through his annual Darius & Friends benefit concert and golf tournament, as well as for more than 200 charitable causes supporting public education and junior golf programs in South Carolina through the Hootie & the Blowfish Foundation. Currently, Rucker is on the road with his Hootie & the Blowfish bandmates for the Group Therapy Tour as they celebrate the 25th Anniversary of mega-hit Cracked Rear View as well as the forthcoming release of Imperfect Circle, their first album in nearly 15 years, set for release November 1 with Universal Music Group Nashville. For more information, visit www.dariusrucker.com and follow on social media @DariusRucker.

Leaving a lasting impression on fans across the globe with their high-octane live show and chart-topping songwriting skills, THE CADILLAC THREE are releasing new music. Their cheers, beers and hallelujah motto comes from the road to playlists with a song they co-wrote alongside band and crew called “Crackin’ Cold Ones With The Boys” and “All The Makin’s Of A Saturday Night,” for College Football broadcasts throughout the season. Musical co-conspirators Jaren Johnston (Guitar & Lead Vocals), Kelby Ray (Lap Steel Guitar) and Neil Mason (Drums, Percussion & Vocals) create a sound that hovers between radio-ready Country anthems and hard-and-heavy Rock ballads evident on full-length efforts LEGACY and BURY ME IN MY BOOTS via Big Machine Records. Funneling their Southern-to-the-core sensibilities into their own catalogue, the Nashville natives have cuts for Tim McGraw, Rascal Flatts, Miranda Lambert and Steven Tyler, to name a few. The 2019 CMA International Award nominees for International Artist Achievement have built a loyal following across the globe since taking home the 2014 UK Classic Rock Roll of Honour: Best New Band.  Their wide-reaching base also grew when they played to 40,000+ fans at Download Festival ahead of their headline THE LONG HAIR DON’T CARE TOUR. "Like Kings of Leon before them, they're poised for their first big break in the U.K. – where they've sold out every headlining show for nearly two years – before conquering their U.S. home turf,” heralded Rolling Stone. After a jammed 2018 touring with Luke Bryan and Dierks Bentley back in the US, TC3 kicked off their own COUNTRY FUZZ TOUR that extends throughout 2019.

Old Dominion has emerged as one of the hottest breaking bands out of Nashville, fusing clever lyrics and an infectious sound. Their lyrical wit and hook heavy songwriting has certainly proved a winning method: since breaking onto the music scene in 2014, the band has notched seven No. 1 singles at country radio, surpassed one billion on-demand streams, earned several Platinum and Gold single certifications. They are currently headlining arenas and amphitheaters around the globe extending into 2020 with their recently announced "We Are Old Dominion Tour." The reigning CMA Vocal Group of the Year notched their third nomination in the category in 2019 and they are the reigning and two-time ACM Group of the Year. In 2017 frontman Matthew Ramsey was ASCAP's "Artist of the Year" and the band has received numerous nominations including CMT Music Awards, American Music Awards, Billboard Awards, and iHeart Radio Awards. Old Dominion consists of lead singer Matthew Ramsey, lead guitarist Brad Tursi, multi-instrumentalist Trevor Rosen, bassist Geoff Sprung, and drummer Whit Sellers. Their melodic, self-titled third LP will be released on Oct. 25, 2019.

Brett Young has captured the hearts of fans everywhere through his honest lyrics and West Coast-meets-Southern sound, aptly dubbed "Caliville" style. The 2018 ACM Awards New Male Vocalist of the Year released his sophomore album, TICKET TO L.A. on BMLG Records last year. The 13-track project hit the Billboard Albums No. 1 spot on release and features PLATINUM-selling lead single "Here Tonight" which marks Young's fifth consecutive No. 1 single. The follow-up release, "Catch," is currently climbing the radio charts. TICKET TO L.A. follows his PLATINUM-certified, self-titled, debut album in 2017 with New York Times calling it "soothing, approachable." Recorded in Nashville with producer Dann Huff (Keith Urban, Thomas Rhett, Steven Tyler), the 2018 ASCAP Country Songwriter-Artist of the Year penned 11 of the 12 tracks, which also produced four consecutive No. 1 radio hits: "Sleep Without You", "Like I Loved You," "Mercy," plus "In Case You Didn't Know."  He continues to impress the genre and beyond with nominations from the ACM, CMA, Billboard, Teen Choice, iHeartRadio and most recently a CMT Music Awards nod. Drawing in a devoted fan base with his unique voice that is "a gentle and seductive combination of silk and gravel" (All Access), Young has carved out his own lane in both performance delivery and songwriting.  Brett sold out stops on both of his headline tours: CALVILLE TOUR and CMT ON TOUR: HERE TONIGHT and has also toured with Luke Bryan, Thomas Rhett and Lady Antebellum.

Born in Seminole, Texas, Tucker had her first country hit, the classic “Delta Dawn,” at the age of 13 in 1972. Since that auspicious beginning Tucker has become one of the most admired and influential artists in country music history, amassing 23 Top 40 albums and a stellar string of 56 Top 40 singles, ten of which reached the #1 spot on the Billboard country charts. Tucker’s indelible songs include some of country music’s biggest hits such as the aforementioned “Delta Dawn,” “Soon,” “Two Sparrows in a Hurricane,” “It’s a Little Too Late,” “Trouble,” “Texas (When I Die),” “If It Don’t Come Easy” and “Strong Enough To Bend.” Tucker is also the recipient of numerous awards, including two CMAs, two ACMs, three CMT awards and 10 GRAMMY nominations. Tucker is enjoying a career renaissance with & 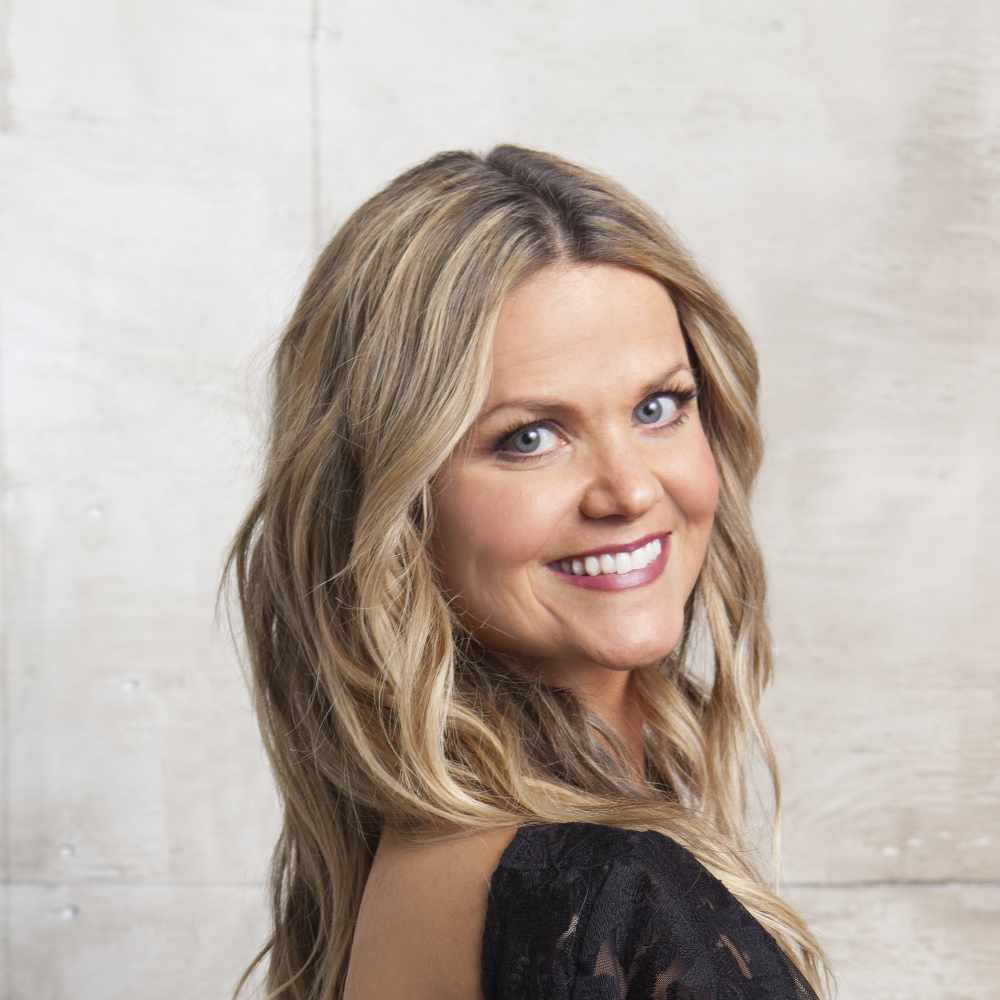