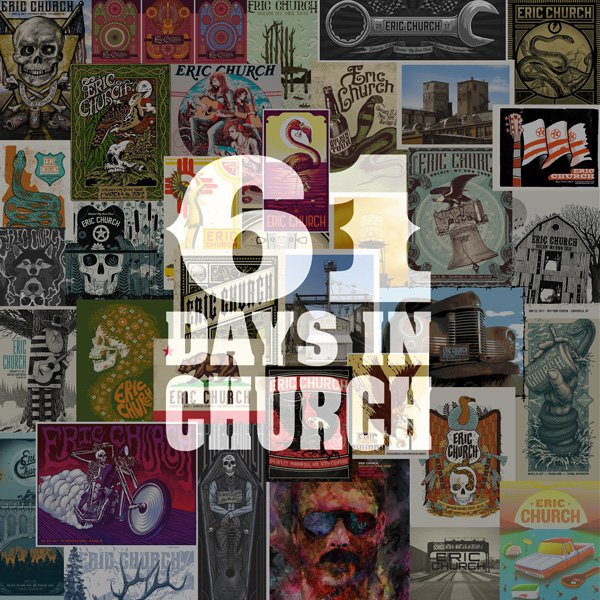 61 US / Canadian tour dates, an average of 37 songs per night, totalling over 200 hours of live music…

That’s what Eric Church played in a five-month period spanning January 13th - May 27th 2017. In an issue takeover, Church hinted to Billboard that something big was to come post-tour…

“We recorded all of it. We had some [songs] that I was adamant I wouldn’t rehearse with the band. I would tell the band a couple of hours before the show, ‘This is the song we’re going to do’, and then I wouldn’t see them until we did it, when we played live…’” says the man Stereogum calls “our greatest working rock star”.

Now, these recordings are being released across a major new project titled ‘61 Days In Church’…

On September 1st, fans had access to 30 initial live recordings from various stops across North America, with a further 30 per month lined up to follow through to the end of the year, including cover songs as well as songs inspired by events that happened while Church was on the road. The tracks will initially be released only on the Apple Music platform for a two-week period before being made available on all streaming services.

"I had so much fun learning songs that were unique to whatever city we found ourselves in,” Church reflects. “I learnt a lot about each place, and it was special to see the crowd react to the songs that were only for them.  I'm glad we recorded it and can relive it forever.”

The unique, individual tour posters from each stop will serve as the artwork for each batch of releases.

Church’s ‘Holdin’ My Own’ tour had sold close to one million tickets by the end of its run, making it the top music tour in the first quarter of 2017 (Pollstar), but as Dave Brooks (Billboard) noted, “Fans will remember that tour by another metric: the marathon three-and- a-half hours Church played nightly as he criss-crossed the United States and Canada.”

‘Mr. Misunderstood’, the most recent studio album, is out now in re-issued form on Spinefarm Records.  https://SpinefarmRecords.lnk.to/MrMisunderstood